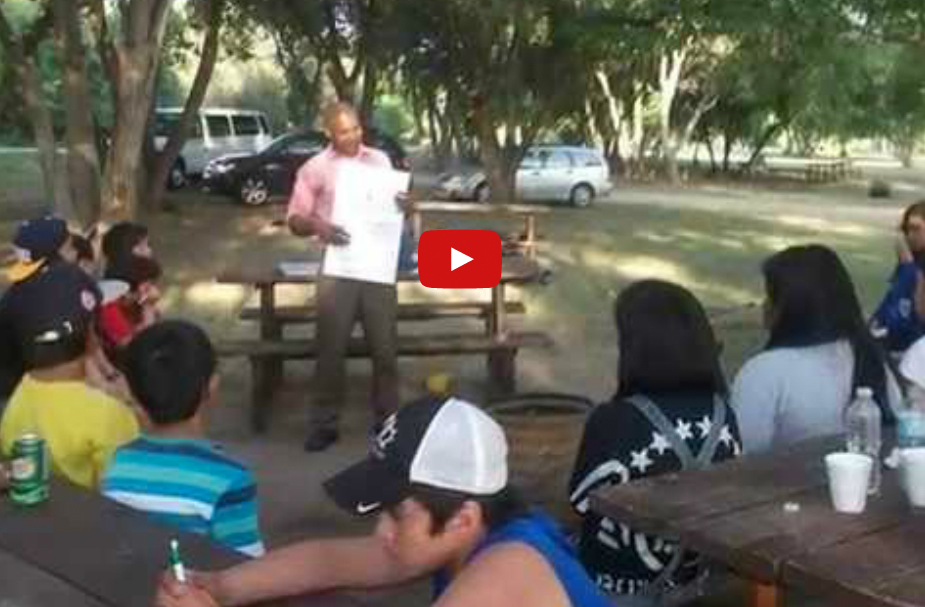 Watch this touching digital story by Allie Steinley on the Canadian Camping Adventure for Newcomer Youth that I spoke at this summer.

It was a hectic week for me, preparing for a Leadership Talk.
It went very well and the children were very receptive. They are such an amazing group of kids. They really appreciated my coming to talk to them.

My message was, ‘Always Strive for Excellence’. I told them Canada was the best country to be in for their dreams. Fortunately, there was this 16 year old Nigerian girl who, at her age, will be starting university this September. She was so brilliant in school such that they had to make her skip grades in high school.

So she concurred with the message I was giving them. I talked about the need for respect, diligence, hard work and the 4Ds that I normally tell kids about- Discipline, Dedication, Determination & Devotion.

At the end I gave them a true story to read about a Zimbabwean girl who lost both parents while she was just eight but studied on her own at home as she could not have anyone to pay for her school. She still went on to do high school in just two years as she was extremely brilliant and became the youngest kid at 14 at the University of Zimbabwe. I will share with you a post to the story below.

I hit home after midnight as we got lost on our way back. But it was worth every moment. I am currently on the road to Saskatoon where we are taking the kids for an excursion.

(CNN) — She grew up in grinding poverty, losing both her parents at a tender age but 14-year-old whizz-kid Maud Chifamba has defied adversity and hardship to break academic records.

Against all odds, the extremely bright teenager has written history as last week she became the youngest ever university student in Zimbabwe — as well as the whole of southern Africa, according to education officials.

Maud, who was born on November 19, 1997, has just started her studies toward a Bachelor of Accountancy Honors Degree at the University of Zimbabwe, the country’s oldest and most esteemed educational institution. Her intellectual prowess and hard work have earned her a four-year scholarship of nearly $10,000 after she excelled at last year’s Advanced Level exams.

Now, one week into her new life at the university, softly-spoken Maud already feels settled.

“I’m really enjoying it,” she says with striking modesty. “It’s better than what I expected. I’m just enjoying all the lectures.”

But before deservedly claiming a spot inside the university’s vast lecture halls, finding herself amongst much older students, Zimbabwe’s wunderkind had to overcome tremendous financial and social challenges.

Born to a poor family in the Hunters resettlement community in Chegutu, central Zimbabwe, Maud lost her father when she was just five years old. Her mother also passed away last year. Her two brothers, who are general workers at a farm, were unable to pay the fees required to keep her at formal school so Maud started studying vigorously at home all by herself.

Armed with determination, Maud put all her efforts into studying, embarking on a disciplined reading routine that lasted for several hours each day. “I studied very hard,” she remembers. “For the biggest part of the day and even into the night,” adds Maud.

Maud says the death of her parents made her realize that she would have to take her destiny into her own hands.

“It really motivated me to work harder because there was no one to take care of me except myself in the future,” says Maud. “That was … a motivator for me to have something to do with my life.”