Warning: "continue" targeting switch is equivalent to "break". Did you mean to use "continue 2"? in /nfs/c08/h02/mnt/147599/domains/childrensvoicezimbabwe.org/html/wp-content/plugins/jetpack/_inc/lib/class.media-summary.php on line 77

Warning: "continue" targeting switch is equivalent to "break". Did you mean to use "continue 2"? in /nfs/c08/h02/mnt/147599/domains/childrensvoicezimbabwe.org/html/wp-content/plugins/jetpack/_inc/lib/class.media-summary.php on line 87 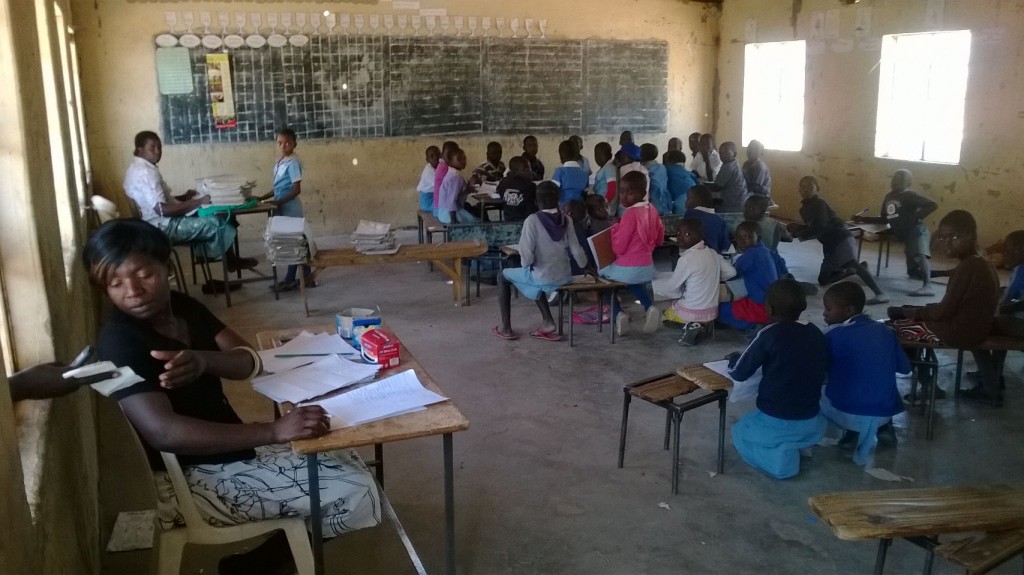 The clasroom situation before the UN Women’s Guild Grant.

The Collin Nyabadza Children’s Charitable Trust is Recognised at the UN, Austria, Vienna

In September, 2016 the Collin Nyabadza Children’s Voice Charitable Trust (CNCVCT) received a grant of €10 000 (USD11 000) from the United Nations Women’s Guild (UNWG) in Austria, Vienna. The grant was for the purchase of classroom furniture for Early Childhood Development Classes (ECDC) at Bemba, Mpilo, Phelela and St. Joseph’s Primary Schools in Tsholotsho District. The project was well executed by Team CNCVCT. Afterwards our Executive Director Mr. Collin Nyabadza was then invited to an Award Ceremony in Vienna by the UNWG on the 5th of October, 2016. He however, had to meet his own travel expenses and upkeep while in Austria. This did not deter Mr. Nyabadza. Read his story on how he made it to Vienna through the generosity of Swift Current residents and businesses, and friends across the globe.

The Trip to Vienna, Austria

After we had successfully implemented our project we sent photographs and a letter of thanks to the United Nations Women’s Guild (UNWG). They were impressed with the manner in which we had carried out the project. They then invited me to their Award Ceremony in Vienna which was to take place on the 5 th of October, 2016. Being a charity that aims at ensuring that every penny they raise goes to the children being supported worldwide, they emphasized that I would have to meet my own travel expenses. This challenge did not intimidate me at all. For starters, I went to Marlin Travel to get a quote for my ticket to Vienna. They gave me a quote for CAD1500.

Immediately upon getting the cost for the ticket I started the ball rolling. I visited my workplace where I shared the news of my proposed trip to two co-workers who have always supported our organization. They immediately gave me $100 each. That gave me lots of hope. I then began posting news on my upcoming trip, on my Facebook page that I normally use as a blog to update people on the work we are doing. Next to chip in with support was a friend I went to school with at Mzilikazi Primary School in Bulawayo, Dr. Nzimanyana Mpofu. He is now a medical doctor in Australia. Like me, he quickly saw the long term benefits of the trip. He then sent me $500 towards my. I was now beginning to see light at the end of the tunnel. Next in the line of support were three businesses here in Swift Current where I live. These were Standard Motors, Wallace Construction and my bank CIBC who helped me with varying amounts. It was exciting as I was getting closer to my goal. I have one good friend of the CNCVCT, who resides in my community, Darlene Dyck. She has always supported us tremendously in some of our projects. She then gave me a cheque for $500, and I was almost set. Her help was quickly followed by a donation of $200 from a UK based friend of mine, Washington Magaya, who also runs his own charity.

As all this was happening, I kept checking for airline deals on the web. It was then I realized that Air Canada had some very good specials. I quickly went back to Marlin Travel where I was fortunate enough to get a good deal for $1216. I right away purchased my ticket. I was due to fly out from Regina International Airport on the 3rd of October, 2016 via Munich, Germany and coming back on the 8th of the same month. I was now in need of funds to ensure that my upkeep in Vienna went on well. One Saturday as I was at our market place with the kids at my workplace, one lady politely came up to me and said, “Are you Collin? I heard about your trip to Vienna. You and your team are doing a fantastic job. I have some money I would love to give you for your trip”. She then rushed to TD Bank just across the street from where we were, and when she came back she handed me an envelope with $150. It was as if I was in a dream experiencing so much love from my community. As I was still at the marketplace I met Staci Schaitel, one amazing lady who has always been a bedrock for our organization. She had spread word about my trip to some of her friends. As I got back home later in the evening another lady had sent me an email saying she would be sending me some money towards my meals while in Vienna. Just before I left she had sent me $50 through Interac. It was amazing to see how God works in our lives.

As I prepared to fly out to Vienna, a family friend Judy, came over and dropped off an envelope with $100 in it. I had approached her wondering if she could approach her company for help on my behalf. Unfortunately, she came back to me saying that they already exhausted their budget for such activities. However, she was impressed with the work that we were doing and thus she was willing to help me travel to Vienna. It was an amazing feeling seeing the support of all these people. 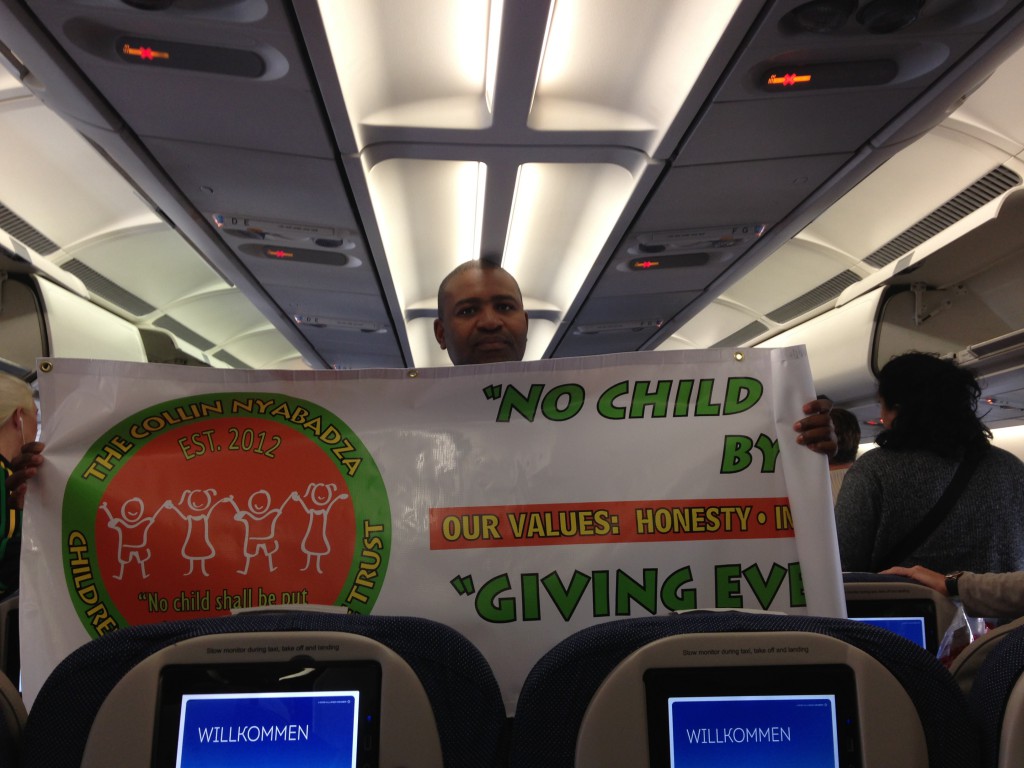 I have one Zimbabwean friend in Calgary, Alberta whom I am mentoring, Joyce Mangozho. I told her about my upcoming trip. She quickly sent me $100. She deeply believes in our work and has been following our progress. It was now time to round up my preparations. The UNWG had asked me to bring our organisation’s banner with me. I had gone to Signs‘n’Such for costing. I met one amazing lady there who felt it was for a worthy cause. She and her husband then agreed to pay for our banner. It was a lovely piece of work. (See some of the pictures).

On the 3rd of October, 2016 I eventually departed for Regina by bus at 6:30 a.m. By 9:30 a.m. I was in Regina. After having had some breakfast at the STC Bus Depot, I headed to the airport where I immediately checked in. At exactly 4:20 p.m. my flight was taking off. I then flew to Toronto, Munich and eventually to Vienna. Along the way I talked about the work of the CNCVCT to some people I met. I had prepared some business cards which I distributed on the trip.

At the UN Complex 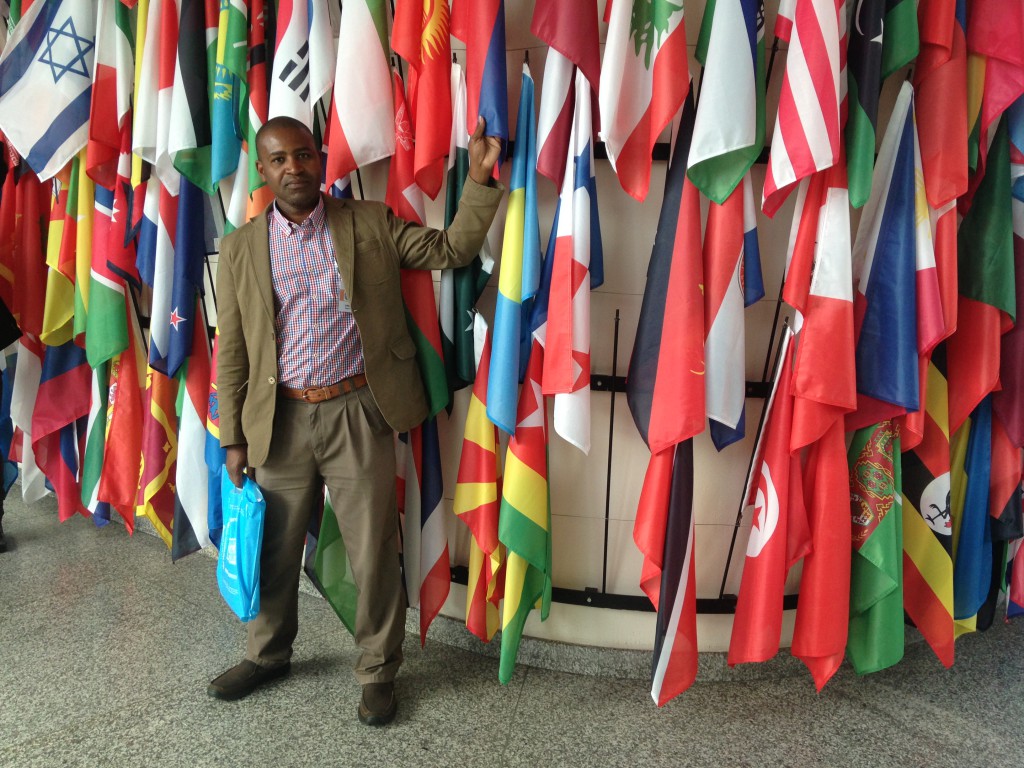 I arrived in Vienna on the 4th of October, 2016. The next day I woke up early as I had been advised to come earlier than the starting time, since everyone has to undergo a thorough screening process. After breakfast I headed to the complex. The previous day I had connected with two colleagues I met at my hotel. They were from Tanzania and Benin, and were attending a seminar on Atomic Energy at the same UN Complex. They had given lots of information. The three of us all walked there. It was just a ten minute walk from my hotel. After going through the security check, I was allowed in. The first thing you see are the flags of all the countries that are part of the UN. These are arranged in alphabetic order. I was the first to arrive for the event. After a while the UN team started coming in. One of the first person I met was the spouse to our (Canada’s) Ambassador to Austria. She was amazed as I showed her our project which was one of those appearing on posters that had been put on the walls. It was an exciting moment reading about our project in Vienna. I felt so proud of my team and wish they were all there with me. They are the people who make this organization what it is. When all the preparations had been completed we were all invited in. The UNWG Secretary General then went on to highlight to the guests that her organization had received 200 applications for funding and only 38 received the money. After a while it was the award ceremony that is the issuing of the certificates. When our organization was called up I went over to the podium to pick up our certificate. I took with me our lovely banner. I asked one lady who also works for the UN to take me some photos. The rest of the story is shown in pictures. 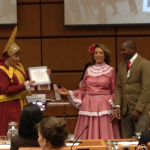 Presentation of the Award 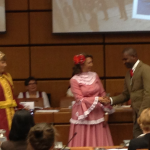 Accepting on behalf of our organization 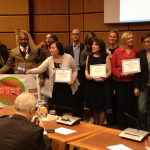 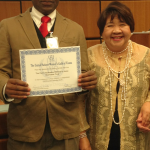 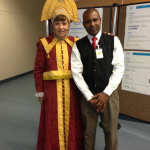 The President of the UNWG 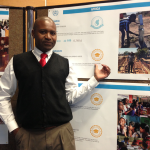 All in all, the trip was a resounding success. It enabled me to establish more important networks which will in the long run tremendously benefit the Collin Nyabadza Children’s Voice Charitable Trust. I wish to take this opportunity to deeply thank all those who helped make this trip a reality. The success of our work depends entirely upon the love, support and generosity of people like you. You are our true heroes. Please may you keep being a beacon of hope and inspiration for others!!!!! 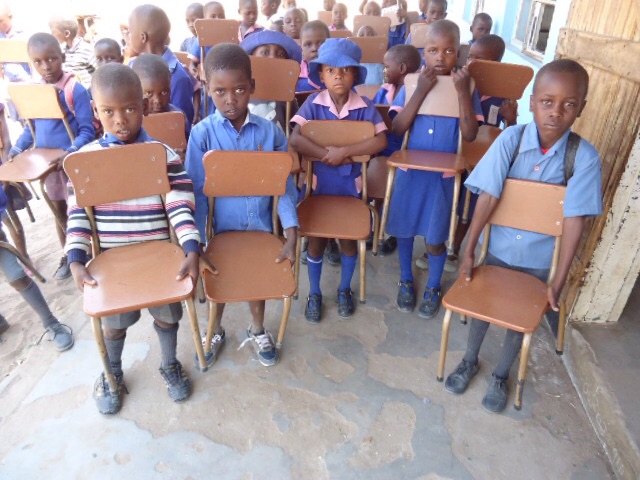 Thanks to the amazing CNCVCT team and the funds provided by the UNWG grant, these children can now study in a conducive environment with tables and chairs. 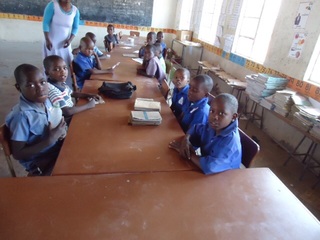